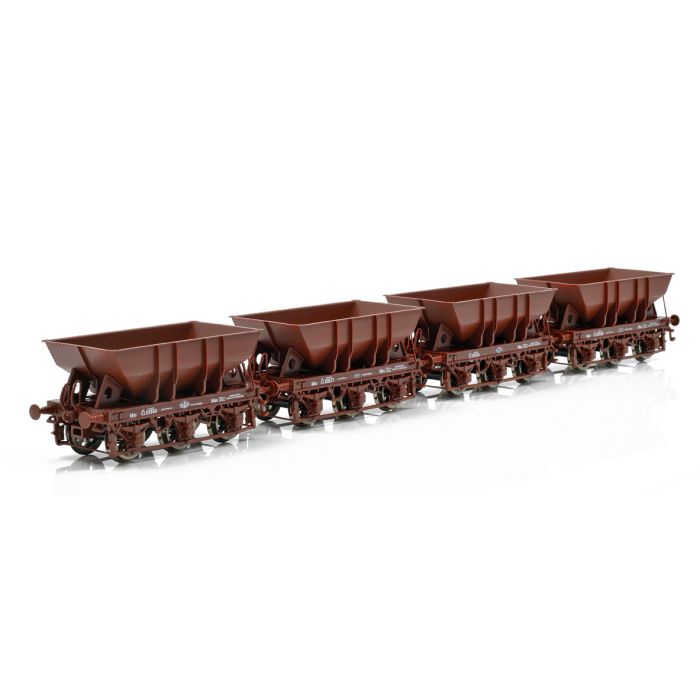 NMJ Topline Iron Ore wagon set with 4 wagons of the SJ Mas wagon modell 1908 with spoke wheels. .The iron ore line was a cooperation between Norway (NSB) and Sweden (SJ) as you can read below.

All together 1267 Mas wagons were registered in Norway including an additional 250 wagons built by Talbot in Achen from 1951-1953. They were given the numbers 1000-1249. Norwegian and Swedish wagons were mix in the trains. The very successful cooperation between SJ Malmbanen and NSB Ofotbanen is a very interesting chapter in the Scandinavian Railway history.

The Iron Line was a huge cooperation between NSB, SJ and LKAB. Roco and NMJ cooperate in this unique and vast project. NMJ will make the 1902 and 1908 version of M2 and MAS, while Roco will make all the modern versions of the Mas with welded iron ore baskets. All made from NMJ documentation. This means that NMJ and Roco will make all the interesting versions of the iron ore wagons from the Ofotbanen/Malmbanen from Kiruna to Narvik. Since the models share chaissis and many parts we have decided that Roco will manufacture all the wagons, including the NMJ Topline versions seen here.